In a clear signal to the industry and to enhance its R&D and international leadership capabilities, Terminus Group, a global leader in smart service solutions, has appointed IEEE Fellow, Dr. Yang Yang, to its growing cadre of Chief Scientists. This follows the recent appointment of Dr. Ling Shao, who joined as Chief Scientist of Terminus Group and President of Terminus International.

With a wealth of scientific and professional expertise, Dr. Yang will play a leading role in the company's efforts to explore the potential of the Internet of Things (IoT) and artificial intelligence (AI) in reducing carbon emissions. He will also promote the concept, research, development and adoption of Terminus Group's next level smart city platforms and scenarios – the 'AI CITY'. 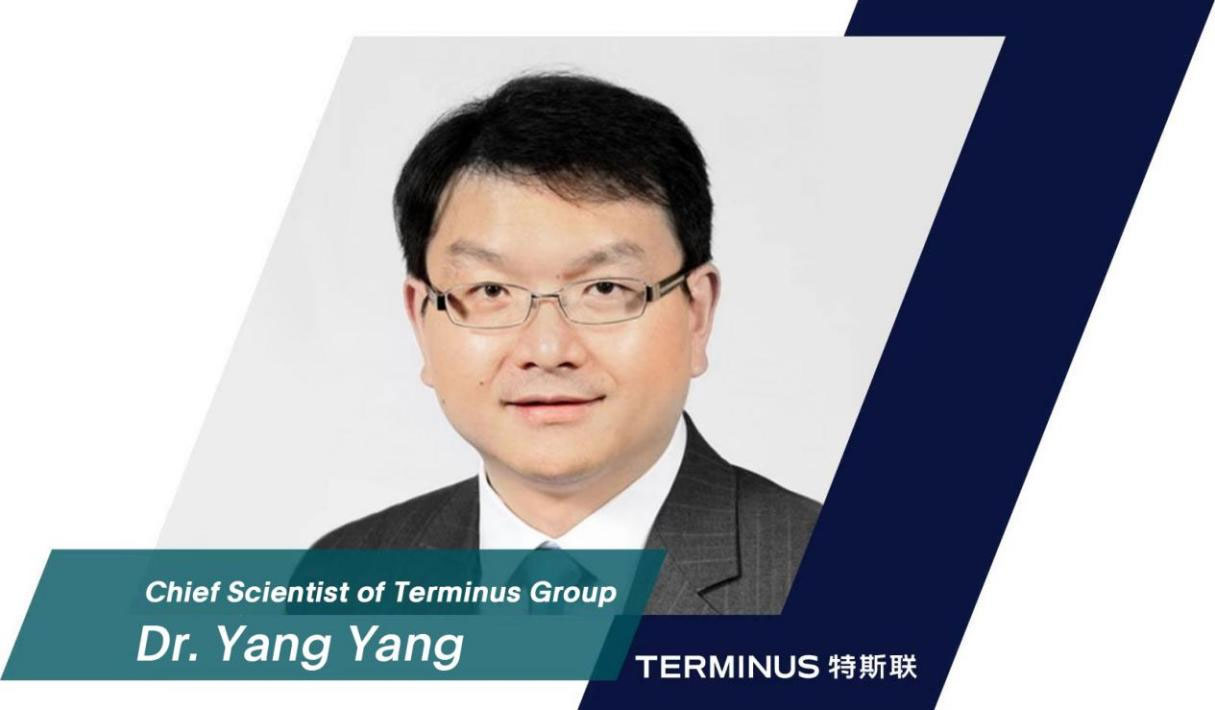 In a recent letter to the company's board of directors, Victor AI, the Founder and CEO of Terminus Group, said: "Technological and scientific innovation are the core components of the company's DNA, and having the best in global talent on board is the spearhead of that strategy."

AI continued, "The appointments of Dr. Yang and Dr. Ling Shao are significant indications of the company's talent recruitment strategy – the 'T-Plan' – which aims to attract and retain the best and brightest minds in their field of expertise. Their innovative spirit will not only accelerate the company's R&D functions but will also be the key driver behind the company's ability to meet and exceed global market expectations on Terminus Group's next generation of smart products and services."

As part of its continuous efforts to enhance its talent structure, the company unveiled the "Talents Plan" (T-Plan), which aims to attract and retain the best and brightest minds in the technology industry. This initiative involves the recruitment of hundreds of scientists and technology experts with doctoral degrees in areas such as AI, Big Data, and the Cloud.

Commenting on his appointment, Dr. Yang said: "In recent years, I have been impressed by Terminus Group's ability to develop and implement bold and innovative ideas, combined with a pragmatic service spirit.

"With the increasing number of connected devices and the technological advancements that are happening in the field of Artificial Intelligence and the Internet of Things [AIoT], I believe that the time has come for us to start implementing these combined strategies," Dr. Yang added.

At the core of the company's strategy is the exploration and pushing of boundaries within the AIoT industry, while meeting the needs of the people who will live and work in these future cities. With his extensive experience in the field of AIoT, Dr. Yang will be tasked with taking a leading role in the company's efforts to research, develop, and promote the concept and adoption of AI CITY scenarios.

While the T-Plan will continue to identify and recruit the best and brightest, it can already be said that the majority of Terminus Group's technical team and management are graduates of some of the world's most prominent universities. These include the likes of Stanford University, Harvard University, Tsinghua University, MIT, Queen Mary University of London, and Sun Yat-sen University.

Before joining Terminus Group, Dr. Yang had already led over 20 cutting-edge AIoT and broadband mobile communication R&D projects in the UK and China. He is an expert in the field of intelligent IoT and was a member of the Chief Technical Committee of the National Science and Technology Major Project "New Generation Mobile Wireless Broadband Communication Networks", funded by the Ministry of Industry and Information Technology of China (MIIT). He was also a member of the Chief Technical Committee for the National 863 Hi-Tech R&D Program "5G System R&D Major Projects", funded by the Ministry of Science and Technology of China (MOST).

Currently, Dr. Yang is also a member of various international technical committees and organizations. For example, he is the Chair for 5G Industry Community and the Chair for Asia Region at Fog/Edge Industry Community, at the IEEE Communications Society. He is also an associate editor of two IEEE technical journals – IEEE TNSE and IOTJ – as well as serving as a technical investigator for the Shanghai Intellectual Property Court.

From 2012 to 2016, Dr. Yang led a team to design and deploy distinctive IoT technologies for the water monitoring system of the South-to-North Water Diversion Project in China, which is from Danjiangkou Water Reservoir, in Hunan Province, to the cities of Beijing and Tianjin (1,432km – the longest in the world). Currently, he is also the Principal Investigator of the national key project "5G-enabled IoT Infrastructure Development for the Smart Cities in Guangdong-Hong Kong-Macau Greater Bay Area", funded by the National Key Research and Development Program of China "Key Technologies for IoT Networks and Smart Cities". Dr. Yang has also served as a member of the board and Greater China Director of the OpenFog Consortium and Chair of the Steering Committee for the Asia Pacific Communications Conference (APCC).

Before joining Terminus, he was the Director of Key Laboratory for Wireless Sensor Networks and Communications at the Chinese Academy of Sciences, the CTO of Fuzhou Internet of Things Open Lab, the Director of Shanghai Research Center for Wireless Communications, Vice Dean of the School of Information Science and Technology, Deputy Dean of the School of Creativity and Art, and the Founding Dean of Kedao College, at ShanghaiTech University.

In 2018, Dr. Yang was elevated to IEEE Fellow "for contributions and leadership in wireless access and networking".

Dr. Yang arrives at Terminus Group with a highly respected domestic and international reputation in both academia and industrial circles. This is largely due to his extensive research and practical experience related to the development of next-generation mobile communication systems and intelligent IoT technologies. He has filed over 80 technical patents, published more than 300 research papers and six books in wireless communications and intelligent IoT technologies.

In his recent book "Intelligent IoT for the Digital World", published by Wiley, in 2021, Dr Yang proposed that the ultimate goal of the digital world is to provide "everyone-centric customized services" for individual users, noting that the most efficient and intelligent service architecture will be built on IoT and multi-tier computing networks. This aligns with Terminus Group's approach and advocation of AIoT technology, which is focused on people-centric innovation.