Recently, the commencement ceremony of Shenyang's major industrial project including Terminus' AI CITY was held, with senior officials including the party secretary, and the mayor of Shenyangin attendance. For Terminus Group, this means it is now the official major high-tech partner of the city of Shenyang, following the principles of the province's macro strategy and China's National New Infrastructure Plan.

Shenyang, a provincial city in Northeast China, has made tremendous efforts to become the high-tech hub of the region, which is currently home to over 100 million people. In April this year, Shenyang signed a cooperation agreement with Terminus Group and therefore authorized Terminus Group to build the AI CITY in Shenyang, which is another milestone on the company's ambitious plan of establishing a global AI CITY network. Driven by the ambition of making the world an interconnected place, Terminus Group has empowered many cities including Dubai, Chongqing, Guangzhou, Beijing, Shanghai with its cutting-edge AIoT technologies, pioneering in further pushing the boundaries of possibilities between aligning technology and peoples' everyday lives. 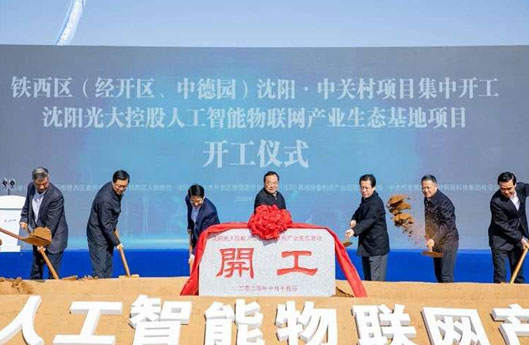 Commenting on the cooperation with the city of Shenyang, Victor AI, founder and CEO of Terminus Group, said: "Terminus Group launches its AI CITY in Shenyang aiming to build yet another AI CITY project, where we plan to seamlessly combine the natural existing ecosystem with our AIoT technologies, at the same time inviting top foreign and domestic technology companies to settle, work and grow. Being functionally different from traditional cities, our projects implement AIoT-based smart scenarios, share and enable the information and the delivery of the services in a timely manner, and interconnect various technology platforms necessary for the comprehensive system of digital services to operate."

Terminus Group AI CITY is supported by Terminus Group's independently developed operation system-TACOS (Terminus Group AI CITY Operating System), a platform that allows previously independent layers of the operating system to merge and interact with each other. The result of the following approach is Terminus Group's undeniable potential in solving the urban problems in a more efficient and agile manner, therefore making people's life more convenient. By following the newest trends in the field of digital transformation, the company's AI CITY projects are expected to further develop at a scale and pace faster than ever.

"Terminus Group AI CITY is a game-changer that will undoubtedly reshape the way we perceive cities and urban infrastructure. We are fully committed to the development of AIoT technologies and our innovative vision of the city. The partnership with Shenyang will definitely accelerate not only the digital transformation of this particular city, but the northeast region of China, as a whole. To be even more precise, reshaping Shenyang's industrial development will be a driving factor in the economic development of the northeast region. Moreover, enhancing the core competitiveness of this area is a current key mission for Terminus Group", Victor AI added.

Terminus Group first officially unveiled its AI CITY concept on September 23 at Terminus Group AI CITY Global Press Conference, which revealed the company's ambitious strategy of establishing a global intelligent AI CITY network. The event has also proven the company's readiness to step up with setting new standards for conventional cities around the world and pave the way to the next generation of AI CITIES.