Victor AI, Founder and CEO of Terminus Group, in recognition of his outstanding post-graduate career achievements, was recently invited by Washington University in St. Louis (WUSTL) to a "Fireside Chat" with Professor Kurt Dirks, Vice Chancellor of International Affairs at WUSTL and Director of their McDonnell International Scholar's Academy. The chat covered topics including corporate leadership, business culture, but also personal insights and stories detailing Victor's climb to his current level of success and respect within the technology industry. The guests who attended the “Fireside Chat” was an exclusive group made up of McDonnell scholars, WUSTL Business School students and interested academics.

WUSTL is a well-known private research university in the United States, named after George Washington, the founding father of the country. It is known as one of the "New Ivies", and ranked 11th in the nation according to authoritative journals such as The Wall Street Journal and Times Higher Education. The "Fireside Chat" is an important forum at WUSTL designed to directly connect resident international scholars with industry leaders. It was the first time that a Chinese alumnus was invited to the Fireside Chat. 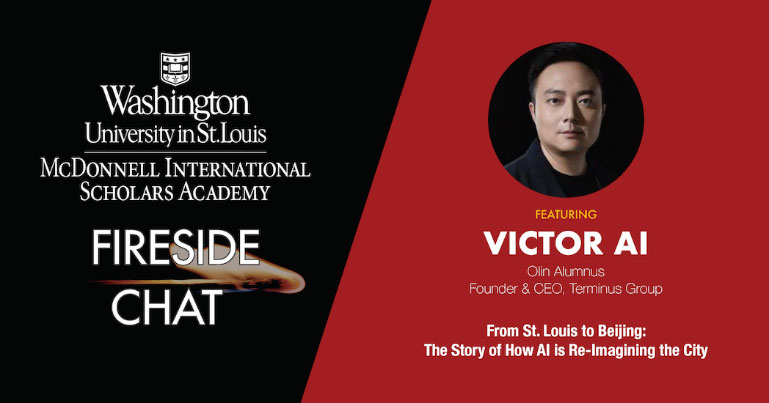 Victor Ai was invited to the "Fireside Chat" at Washington University in St. Louis

As a representative of the new-generation of entrepreneurs and investors, Victor described it as crucial for a company to have a global vision and the leadership to pursue cross-cultural and cross-regional business in order to become a great global company. Victor cited many distinguished technology companies from the 1G era to the current 5G era and concluded that companies that embrace a multicultural context and global perspectives can often gain leading advantages in their respective industries. For example, Cisco, Tencent, Amazon, and Alibaba were born in the Internet era; Netflix, iQiyi, Didi, Wish and Pinduoduo arose from the mobile Internet era; while Huawei, SenseTime, Terminus Group and other industry leaders are part of what he calls the era of intelligence. They are all fuelled by their scalability to go cross-platform, cross-industry and cross-culture, which nourishes the company's intrinsic power of sustainable growth.

When discussing how the cross-cultural education background has impacted his career planning, Victor felt that WUSTL's rigorous training and its inclusive cultural atmosphere had a strong impact on his way of thinking. His years at WUSTL not only prepared him with necessary professional qualities, but also inspired him to view and interact with the world in a fresh way. At the same time, he knows that WUSTL nurtured his natural curiosity and his interest in creating new things and believes that this environment inspired him to commit to his creative and critical thinking skills and to pursue "game-changing" ideas in the market.

Victor recalled: "When I was at WUSTL, it was quite a popular idea for young people to have a job in investment banks in Wall Street, where they could see their dreams come true. So, I joined the Investment Banking Department of JPMorgan Chase after graduation and became the only Chinese in the department at that time. However, I gradually realized that I'd prefer to adopt the buyers' mind set to anticipate upcoming trends in the short and medium term instead of digging in current data and information from the sellers' perspective. Therefore, I threw myself into the private equity investment business, where I have studied future technology and economic development trends, and invested in many Internet and technology companies. Over the years, I have become more and more clear that the next decade will cast the spotlight on the smart economy, and, I must admit, that my curiosity in finding the next new thing drives me to invest in and build my own technology company. In my business world, I am driven by the mantra that I want to be recognized as a person that has changed the world in way that makes society better and helps people be better.

Victor was asked about the challenges of managing people in a multi-cultural setting. He shared the special experience of how he had to lead the Terminus Group's team far from China during this past year when he had visited Dubai for a business deal and could not return to China for 6 months because of health related travel restrictions. Before the traditional Chinese new year of 2020, Victor and a small team went to Dubai for the last round of bidding for the Premier Partnership of the Expo 2020 Dubai. But, as the pandemic swept over the UAE, the team had no choice but to stay, having no idea when they could return home. Victor was able to facilitate a series of cross-border business collaborations between enterprises in the UAE and Terminus Group successfully be appointed the 13th and Official Premier Partner Expo 2020 Dubai and the only Chinese member of this distinguished group that includes the likes of SAP, Accenture, Siemens, Oracle and others.

Victor not only excels in developing markets and businesses but also recognizes his responsibility to help others. When in Dubai, he mobilized all Terminus Group's employees to help the people directly affected by the coronavirus, and launched the Huolei Initiative, a multinational charity program. According to Victor, Terminus Group currently has 800 employees worldwide, including partners from North America, Europe and the Middle East, and we have offices in New York and Dubai. We all join this big family because we firmly believe in that science and technology will change our life. Quite simply, we are in an advantageous position and it is the right thing to do to make sure that those who are in a less fortunate position than us have a chance to get back on their feet. 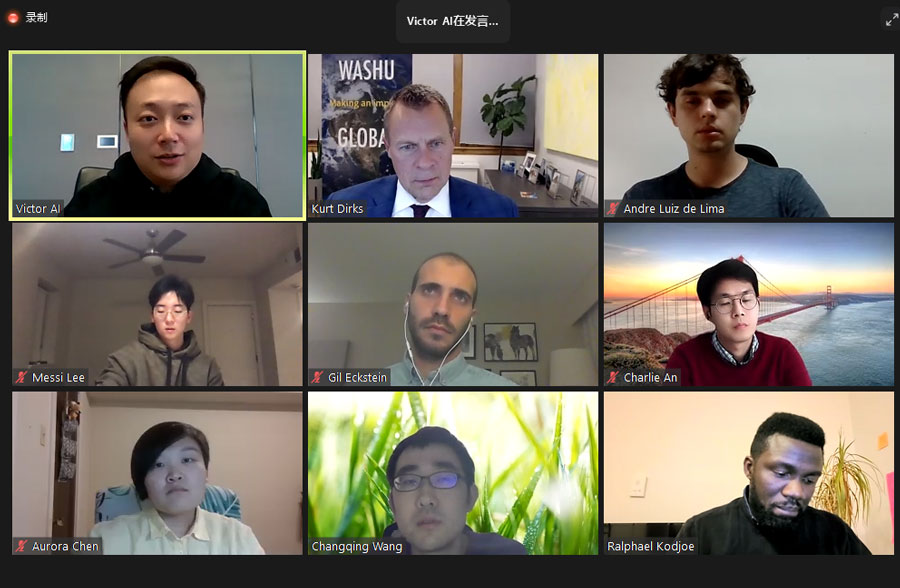 Ai is communicating online with many international scholars

Victor was also quite proud to report to the attendees that last month, Terminus Group officially released its AI CITY strategy and revealed that it aims to build an integrated smart city platform of "software + hardware + ecosystem". The strategy also includes cooperation with what Terminus Group calls international hub cities such as Chongqing, Dubai and Shenyang. With the rapid development of Terminus Group and its AI CITY platform, Victor was glad to note that beginning of a global recognition of the achievements of Terminus Group through the McKinsey Global Institute, Fortune Magazine and Gartner. As the Founder and CEO of Terminus Group, Victor hopes that AI CITY becomes a game-changer in terms of making cities smarter and creating a platform for information and cultural exchanges among countries and regions that will help establish a new pattern of communication and collaboration between and amongst cities across the globe.

At the conclusion of the talk, Victor gave his heartfelt thanks to Professor Dirks and the WUSTL community for this opportunity to share his thoughts and insights. He wished everyone good health and hoped that sometime soon he would be able to meet everyone on campus in St Louis. He said that his fireside chat really made him feel like he was returning to his home campus virtually and he hopes to do it for real soon.