For the second time in four years, Victor Ai, Founder and CEO of Terminus Group, the global smart service and solutions provider, has been named on Fortune Magazine’s list of the top ‘40 under 40’ most promising entrepreneurs.

This year, the 40 under 40 list features entrepreneurs from various industries, including sectors such as artificial intelligence, enterprise level services, investment and financial technology, new consumerism, medical and life sciences, smart manufacturing, automation, and enterprise solutions. For the 2022 listing, Victor sits alongside other prominent founder/CEOs, including Yiming Zhang, the Founder of ByteDance, Chris Xu, the Founder and CEO of SHEIN, and Jeff Li, the Founder and CEO of Shoplazza. 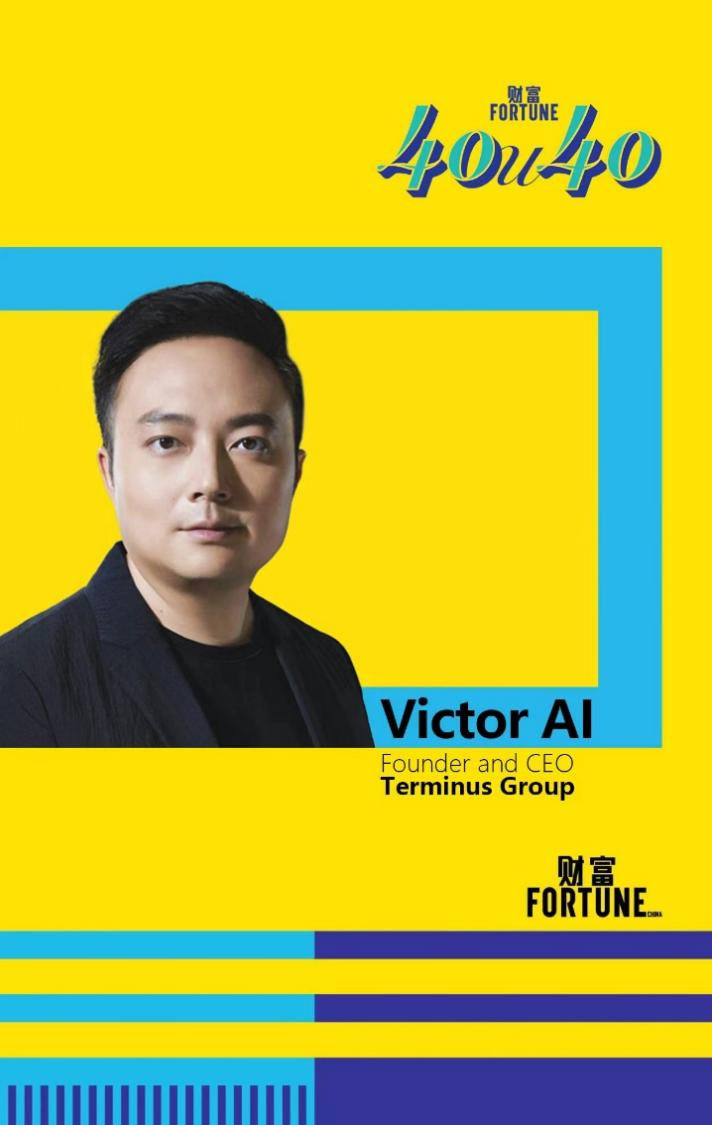 The ‘40 Under 40’ award, sometimes referred to as the “Cradle of Business Superstars”, is Fortune’s recognition of young business leaders who are making a significant contribution to the industries and, by extension in the case of companies with an international footprint, the wider global economy.

First recognized on the list in 2019, Victor AI has once again been recognized for his achievements in leading the rapidly growing, unicorn business that is Terminus Group. Now, increasingly recognized internationally as well as in its domestic market, since being an official premier partner of Expo 2020 Dubai, Terminus Group supplied the 152 AIoT-powered robots that catered to the event’s 24 million visitors, between October 2021 and March 2022.

The award, which is presented to individuals who have made significant contributions to the development of the industries they serve, highlights the achievements of local entrepreneurs. For instance, through his leadership and technological vision, Terminus was at the forefront of identifying the merging concepts of artificial intelligence (AI) and the Internet of Things (IoT), now referred to as AIoT.

In relation to the technology industry, specifically, Victor’s business acumen and experience has seen him at the center of transforming a promising startup company, in 2015, into what is today a world leading AIoT platform operator. Currently, Terminus Group is a developer of four smart/AI cities, holds 1,400 registered patents, has established its first international HQ in Dubai, UAE, and has many other R&D projects currently under development.

Commenting on his listing on the ’40 under 40’ list, for the second time, Victor said: “Despite the various factors that have affected the commercial environment in 2022, it is clear that the desire for innovation from the new generation of business leaders has not been tempered and I am honoured to have, once again, been recognised by Fortune for this prestigious honour – alongside many other talented entrepreneurs and innovators.”

With multiple industry and personal awards already secured, Victor is no stranger to the limelight and, as Founder and CEO of Terminus Group, he has overseen previous recognition from the Gartner Report, the IEEE (AIoT Outstanding Contributor), the eNet Research Institute, among many others.

Through the company's extensive investment in R&D, with internationally acclaimed scientists and experts on staff, Terminus Group has been able to secure over 1,400 domestic and international patents and develop effective marketing and operational strategies for the AIoT field. With such technological achievements, the company, under Victor’s leadership, has also been able to become a leading player in the development of the AIoT architecture, with its own proprietary platform – TacOS (Terminus AI CITY Operating System).

While its international visibility was raised as an official premier partner of Expo 2020 Dubai, and the AIoT-powered robotics it provided, Terminus Group’s core focus is on the development of smart or AI-powered communities.

According to Victor, the rapid emergence and evolution of AIoT has seen Terminus Group’s continuous growth into a leading player in the global market and this will be driven further by the increasing number of people who are involved in the development of the sector.

Victor added, “While it’s true that, within our industry, many are facing a variety of challenges, from the knock-on effects of business interruption caused by lockdowns or the intermittent effects of economic cycles, the perseverance and determination of entrepreneurs engaged in AIoT and related businesses has shown that being prepared to constantly reinvent ourselves and our responses to changes in the market is how companies will triumph.

“For Terminus Group, our market value is intrinsically linked to our scientific and technological innovation, with a focus on the deep value creation and return we can provide to everyone’s needs and future requirements. To this end, Terminus Group will continue to advance its R&D work firmly in the field of urban science and technology, with a view to exploring and adapting to the possibilities presented by a rapidly changing world. In doing so, we can stand proud as an organization contributing to creating a better scientific and technological life experience - for all of humankind," he concluded.