The Collision Conference, known as "Olympics" in the tech world, was held online this year from April 20th to 22nd. The event is a global gathering of provocative ideas, brilliant minds, and investment specialists with the goal of making valuable connections and meeting peers and mentors in all fields related to technology.

The purpose of this year's Collision was to rebuild confidence in society and explore future trends in the tech industry. Global companies ranging from major tech names to rapidly growing start-ups listed on the Fortune 500 all participated in this year's event, including companies such as Salesforce, Twitter, Amazon, PayPal, IBM, ARM, and Sidewalk Labs. Victor Ai, Founder and CEO of Terminus Group was invited as a guest speaker to elaborate on how technology will reshape cities and how AI CITY could disrupt the upcoming transformation of the socio-economic dynamics currently happening within the world's urban clusters.

The conference attracted over 1,000 international media and was well received by the audience. Victor's quote: "In the future, AI CITY will be a highly appealing tech city that can make decisions independently based on the data automatically collected through IoT devices and sensors, which would be subsequently analyzed by the AI algorithms in order to help improve everything from city-wide energy efficiency to residents' lifestyle comforts and experiences. Such a level of integration can be achieved due to technical capabilities of Terminus Group’s proprietary software, hardware, and urban ecosystem architecture:  TACOS."

The Collision Conference is known for its acute sense of global tech trends. Terminus' AI CITY was chosen as the primary topic for the breakout "Creators panel", which is an acknowledgement of the company's achievements in assisting cities in their smart digital transformation. Terminus Group's experience and competitiveness in this regard have become once more officially recognized by the tech world in the era of AI, IoT, 5G, and big data. 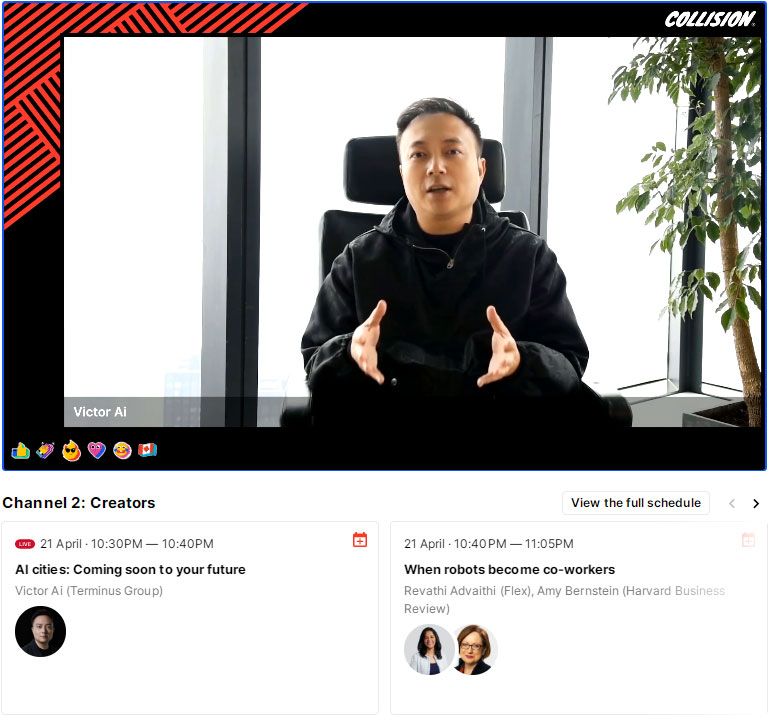 According to Victor, AI CITY is a smart product that relies on AIoT technologies and capable of upgrading and transforming both the urban landscape and the industrial ecosystem. 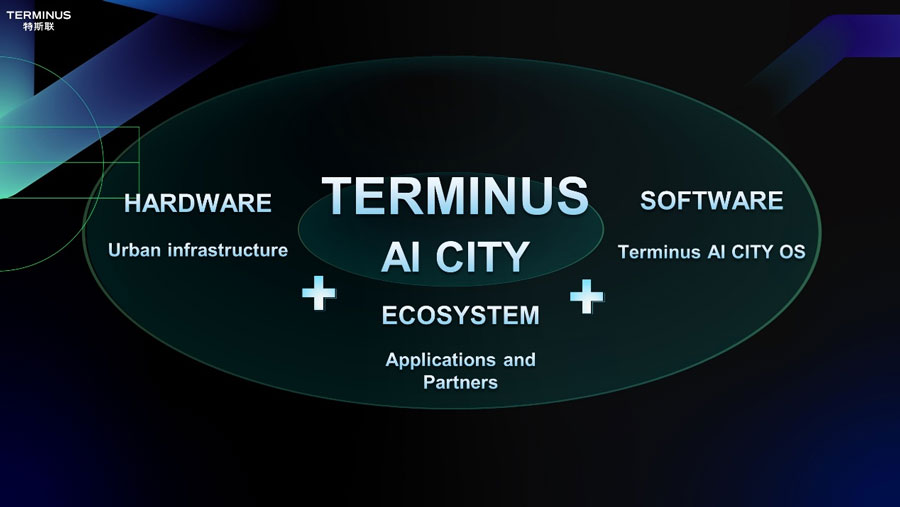 No.1 Reshaping the form of the city

As a result of the application of AI, IoT, cloud computing, and robotic technologies, the urban landscape of AI CITY will be reshaped substantially. Smart infrastructure such as autonomous driving zones and multi-function robotic service platforms will constitute an essential part of the city's fundamental urban landscape. Within the AI CITY, the degree of digitalization will reach 90%, enabling a brand new experience available for different scenarios. For instance, when ICT and environment-friendly concepts are integrated, real-time light-painted roofs, smart energy buildings and virtual courtyard exhibitions will all become a part of the residents' daily life, adding more functionalities to the urban landscape. Public spaces will be flexibly transformed and new diverse functionalities will be added as per users’ requests, therefore improving the utilization of the urban infrastructure.

No.2 Facilitating the urban industry ecosystem

AI CITY offers city-level smart solutions and aims to upgrade various scenarios in cities through smart software and hardware transformation, which will ultimately drive the paradigm shift in the economic city landscape into a smart economy. Specifically, when AI CITY becomes fully established, the industrial clusters featuring AI, IoT, robotics, intelligent manufacturing, new retail and other high-tech features will be incubated, creating a variety of new market opportunities. As a result of those changes, the supporting facilities, the talent pool, and comprehensive urban services will consequently become more and more in favor of smart industries, formulating a positive loop driving the smart transformation of the entire urban ecosystem.

Victor believes that the reason why AI CITY is completely different from traditional smart cities in terms of urban form, industrial ecosystem and residents' mindset is that they are all based on fundamentally different foundations. AI CITY is a brand-new philosophy that features a core architecture of "operation as service", integrating software, hardware, and the digital ecosystem as a whole. Depending on specific projects, it will be able to make decisions independently based on the real demand. AI CITY is a radically transformative product compared with the existing urban operations, equipped with capabilities of seamlessly managing the entire city while taking advantage of a wide range of technologies providing complete sustainability of the urban clusters.

Victor added that AI CITY will sooner or later surpass the traditional smart city because of its "operation-driven" instead of "solution-driven" approach, and its underlying architecture and operations, both of which are a leap ahead of the traditional smart city. AI CITY is a proponent of the OTA urban digital smart platform consisting of "software + hardware + ecosystem", which is very similar to that of smartphones or smart cars. With more AI CITY projects being implemented at the moment of writing, the concept of the city service will inevitably change from "city as a service" to "operation as a service" model.

As an important pioneer project bridging the present and the future, AI CITY is an example of a project with practical implications for solving the critical social problems that bother city residents nowadays. Taking carbon neutrality as an example, AI CITY will reduce energy consumption and increase energy management efficiency at the users' end by intelligently managing and controlling the regional energy demand. The green concepts and tech factors will be adopted as early as the urban design phase and will lead to more green spaces and more sustainable deployment of the infrastructure. With more AI CITY projects being implemented all over the world, a new era of smart, technologically advanced and sustainable cities is on the rise in front of our eyes.