In a posh office building in eastern Beijing, a unicorn startup Terminus Group occupies a whole floor with a sleek all-white modern design from floor to ceiling. Visitors to the company's headquarters couldn't help but feel that they've been transported into a different dimension, somewhat futuristic.

What the company does is equally futuristic. It combines artificial intelligence with the Internet-of-Things (IoT) to make buildings, communities and cities smarter. For instance, Terminus Group helped secure a residential compound in Shanghai with smart access terminals and intelligent software systems that allow the building management to see the movements of residents, visitors and vehicles in real time on their computer screens via image identification. Terminus Group said that its system has led to a significant decrease in once common crimes like theft.

The company has actually implemented thousands of projects across the country. Along the way, it achieved a valuation of more than $1 billion backed by top investors, including Everbright and IDG Capital, although the company declined to disclose the exact figure. 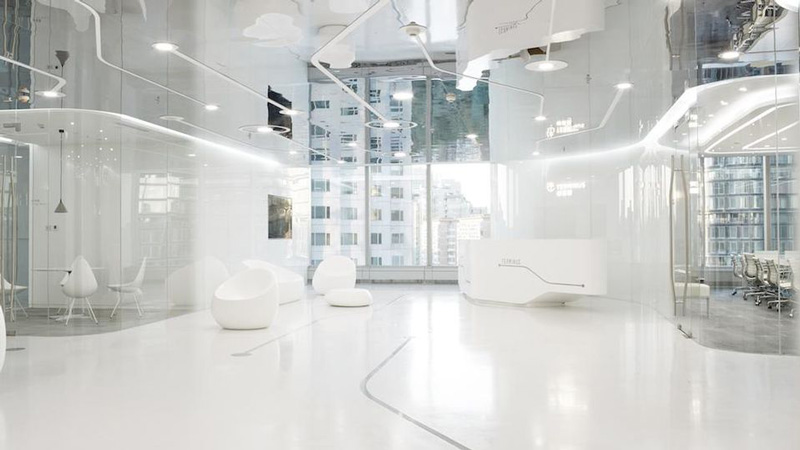 Xie Chao, vice president of Terminus Group, told Money Network in an interview in the company's Beijing office earlier this month. "In more advanced areas, like satellite tracking, our country is still lagging behind."

Terminus Group was founded in 2015. Victor Ai, managing director of the state-owned conglomerate, serves as Terminus Group's CEO. But beyond the support of vast resources, Terminus Group also has to thank a growing domestic market and few regulatory hurdles for its success so far.

Unquestionably we are the most advanced in terms of deploying smart devices like surveillance cameras with image identification capabilities to almost all corners of its largest cities. There are 176 million surveillance cameras installed in many cities, and the number is expected to increase to 626 million in three years, according to IHS Markit. That means there will be roughly one surveillance camera for every other person in the country by the end of 2020.

While this may be a cause of concern for people who disagree with the government's efforts to monitor and control public dissent, the country has embraced this new technology wholeheartedly because these tools can improve the efficiency of the tasks that officials have long been practicing. And once Beijing determines a course of action, things usually get executed with few questions asked.

That has been one of the main drivers for tech providers such as Terminus Group, which has found the majority of its clients among local governments. Labeling itself as an AIoT company, a play on the term Internet-of-Things, replacing "Internet" with "AI", Terminus Group helps local governments to improve public security using AI-powered solutions. The area where Terminus Group focuses the most is population control, allowing the smallest social management units–neighborhood committees–to better monitor residents, visitors and vehicles within designated areas.

Like perhaps thousands of companies in the country, Terminus Group is competing for a piece of the pie in the massive public security market. Including video surveillance systems, access control systems, police alerts, safety inspection systems and more, the public security market was estimated to be worth 620 billion yuan ($90 billion) in 2017, and will grow to 1.12 trillion yuan ($162 billion) in 2023, according to the Security And Protection Industry Association. The global public and personal safety market, by comparison, is expected to reach $518 billion by 2023, according to a 2018 Market Research Future report.

Terminus Group says that its ability to provide one-stop solutions is what differentiates it from the rest of the pack. Local governments generally lack the expertise and resources to manage the many vendors often required for smart city initiatives. They need one trustworthy partner who can help them source, integrate and manage the various hardware and software pieces altogether, Xie Chao explains.

That's why Terminus Group works with companies like video surveillance camera giant Hangzhou Hikvision Digital Technology and the tech leader SenseTime, which was one of the investors in Terminus Group's 1.2 billion yuan ($172.7 million) series B-1 round in October. What's more, Terminus Group helps clients manage such systems to continue making buildings smarter over time through deep learning.

"Unlike Internet companies that provide software systems or mobile apps, what is totally different in AIoT systems is that after installation, [our systems] need to keep pumping out, which needs to be analyzed and optimized to improve efficiency in the long term," said Xie.

So, after Terminus Group was able to do a few projects initially in Shanghai, other cities followed. With almost every county and city in the country setting aside budgets for smart city and public security projects combined with the central government's support, the money available to purchase related services is enormous.

On the website that gathers information of contract bidding and purchases in the country, www.zbytb.com, there are 4,216 bidding items with the keyword "security" from the past 12 months. There are 847 bidding items with the keyword "Xueliang Gongcheng," or Bright Project in English, a term that refers to a central government program aimed at establishing a mass security and safety platforms across the country. The total budget available to be deployed under Xueliang Gongcheng is estimated to be around 50 billion yuan ($7.6 billion) at the beginning of 2018, according to the media outlet iYiou.

But Terminus Group's target goes beyond governments. Parallel to providing solutions to government-led projects, it also sees a huge potential market in commercial properties like office buildings, shopping malls, hotels, hospitals, schools and industrial parks. Aside from keeping the buildings safe, like what Terminus Group does for government projects, the company also integrates sensors that can measure temperatures and water pressure. Its backend systems work like a central nervous system controlling various functions of the building, therefore improving the efficiency of the buildings' operations to save energy and labor.

The challenge for Terminus Group and other companies like it is that commercial building owners in our country today have few incentives for investing in optimization measures like these. "Domestic buildings are not that sensitive towards cost-savings, so smart buildings will be better for markets in advanced economies like Hong Kong because the labor costs are much higher," said Xie. "But overall, labor costs will increase (in our country), and more and more enterprises will start to focus on lowering their costs." That's why Terminus Group has been exploring the Hong Kong market and other countries, though the effort is still preliminary.

Outside of these two main areas, Terminus Group is exploring other ideas to utilize its relatively mature systems. Answering some clients' requests, the company is exploring adding more features for emergencies like fire alarms. Its systems can add fire alerts, but also accurately inform the fire department the numbers and locations of residents during times of emergencies. It is also looking into various ways of helping environmental protection agencies to better monitor factories' pollution treatment practices by adding sensors and connecting those to its backend systems and other points.

The potential seems limitless, but the reality is that many of the solutions like these are still unproven. For example, the idea of continued optimization through deep learning and mining is yet to be tested as all these projects are only one or two years old. Despite having done thousands of projects, Xie admits that perhaps a fraction of 1% of the buildings in the country have been made "intelligent". What Terminus Group plans to do is keep at it, making buildings smart, one at a time.