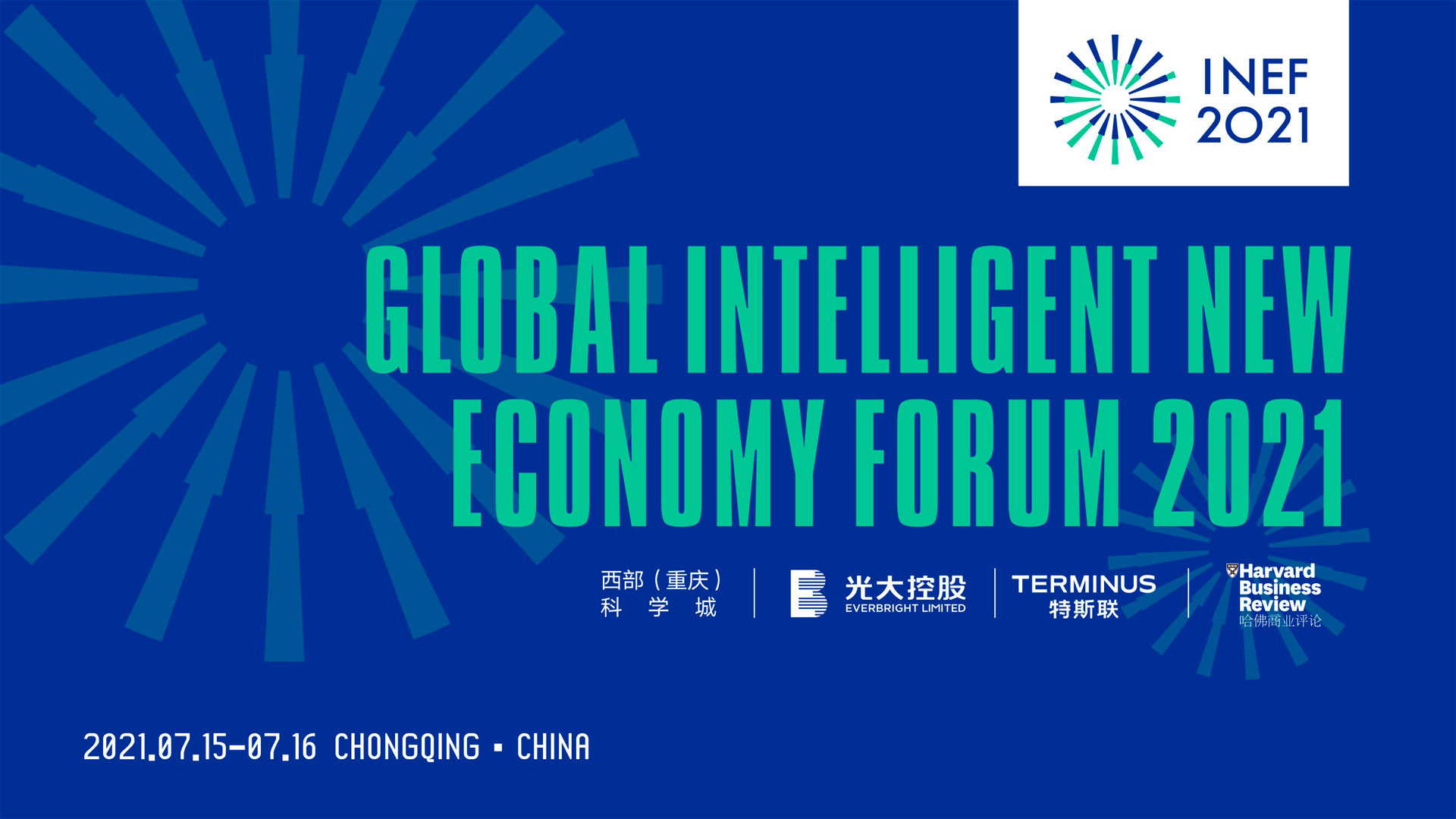 The Intelligent New-Economy Report 2021 was launched at The Global Intelligent New - Economy Forum 2021 (INEF 2021), which took place between 15th and 16th of July in Chongqing, China.

During the event, Harvard Business Review and Terminus Group jointly presented the world's first intelligent new economy report, which aims to present a panoramic view of the industrial trends and points out the investment strategies in the field of the intelligent new - economy.

In 2021, the digital transformation of industries, economy and society started accelerating the application of intelligent new - economy globally. According to an analysis made by Accenture of 12 advanced economies, annual economic growth is expected to double by 2035 due to the impact of artificial intelligence and new technologies. The market size of the core industry of the AI industry is expected to exceed 150 billion yuan in 2021. The combination of 5G, IoT, VR/AR and other technologies with AI at the forefront will create richer application scenarios and accelerate the commercial implementation of artificial intelligence and the Internet of Everything.

The Intelligent New-Economy Report indicated that the intelligent new-economic revolution will reshape the entire business environment and industrial landscape. While enhancing the value and assets of intelligent services, generating new demand and new forms of business, an intelligent new - economy will reshape the production, life, social operations and governance through the transformation of interaction between humans and things, and lead the innovative development of the economy and society. In the next step, there will be many super platforms powered by artificial intelligence, big data, the Internet of Things and 5G as core technologies. Medical treatment, healthcare, retail, urban planning is also going to be greatly affected, giving birth to new unicorns in the industry.

The report points out that the investment communities began to return to rationality in reference to AI and started paying more attention to core technology capabilities and their application potential. It indicates that investors seem to prefer technological startups in fields of medical, education, retail, robot, autonomous driving, etc., featuring strong real industrial practice. Leaders in the intelligent new - economy tend to have a strong IT base, a higher propensity to invest in AI, and a positive view of business cases. At present, the AI open platforms include Tencent Cloud, Alibaba Cloud and Baidu Brain with full technology stack, and iFlytek Voice and Smart Vision with single technology platforms, and TACOS, the open AIOT ecosystem invented by Terminus Group.

Although the intelligence of cities has witnessed more than 20 years of exploration, the current development is still spinning in the status quo of small-scale local data and remains difficult to fully penetrate.

"The AI CITY-related projects, based on the integration of AIOT technologies are a giant step forward in the comprehensive application of new intelligent cities", the report concluded.

"Technology-wise, AI CITY was created in the ICT explosion era, in which AI, 5G, IoT and big data are all making rapid progress. As for the city experience, it can offer customized services for individuals and remotely upgrade its functions. Solution-wise, AI CITY bridges the gap between data silos for individual scenarios and enables cross-scenario data operability, including both software and hardware", said Victor Ai, the founder and CEO of Terminus Group.

"The AI CITY has widely applied AIOT technology to urban governance, industrial development, ecological livability, community services and other aspects, so as to create an unprecedented city of the future". The report indicated that, " the reason why Terminus Group has become the leader of the intelligent new - economy industry, is mostly due to its combination of hardware and software as well as its technological research, development and innovation, such as the excellent AIOT capabilities and the development of its own operating system - TACOS (Terminus AI CITY Operating System).

"Just as smartphones were invented in the era of mobile network and the Internet of Vehicles inspired the smart car revolution. As the aggregators of vertical scenarios and the most important space of industrial economy, cities will also usher in a new upgrade from traditional smart CITY to AI CITY in the era of 5G+ AIOT", Victor said, "AI CITY by Terminus Group is the creation of the digital environment from the very first moment. From hardware to software, from the space of connected things to storage and computing, it is all completely new. Ultimately, it will promote the emerging of smart city that can evolve, so as to accelerate new business models.

Thomas H. Davenport, President and Distinguished Professor in Information Technology and Management at Babson College, stressed that China leads the world in smart city development and Terminus Group has made great achievements in smart city  construction. The AI CITY built by Terminus Group in Chongqing will play an important role in China's AI development as more exciting applications of various contexts are created.

Terminus Group was founded by Victor AI in 2015, with a distinctive goal of building the AIoT industry engine. In 2017, Victor was the first to coin the term of AIOT(AI+IoT). In 2020, AI CITY by Terminus Group, the first AI CITY in western part of China, was launched in West (Chongqing) Science City. From the AI PARK in Chongqing, through the World Intelligence Congress (WIC) in Tianjin, and then straight to the Expo 2020 Dubai - Terminus Group remains an advocate of the AI CITY - a real-world adoption case for futuristic urban management ecosystem. By bringing new vision and solutions, the group ensures that intelligent cities can deliver broader benefits to the whole industry. The company independently developed TACOS (Terminus AI CITY Operating System) as the base for its integrated digital solutions, which are used in various urban scenarios, such as smart driving, smart retail, smart recycling systems, and smart security., Terminus Group has launched almost 9,000 intelligent scenario solutions worldwide up to date, and accumulated rich industry experience in the field of industrial intelligence and carbon neutrality.

"As a frontier of human technology, AI contributes to the momentum to the global economy. Intelligent technology based on digitization is increasingly becoming the driving force of human production and life, which indicates a huge market opportunity. Human society is experiencing a new chapter of technological and industrial changes and it is entering a new era of the intelligent economy. The intelligent new - economy will reshape the business environment and industrial structure. And we believe we would catch the trend when it comes to embracing new technologies", said Victor Ai, the founder and CEO of Terminus Group.